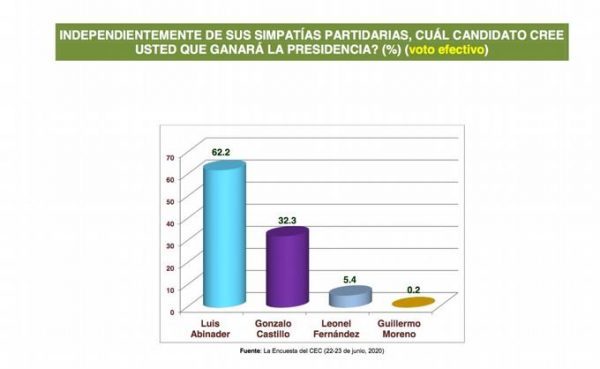 The highly-reputed Dominican polling company, Cibao Economic Center released its final poll for the presidential election on Thursday, 25 June. Leonardo Aguilera, CEC president, announced the results show the opposition candidate, Luis Abinader of the Modern Revolutionary Party (PRM) taking the election with 55.2% of the vote. This is two points more than the 53.2% in the previous poll conducted by the Cibao Economic Center.

Runner up, Gonzalo Castillo of the ruling Dominican Liberation Party (PLD) gets 33%, while former President Leonel Fernández of the People’s Force (FP) gets 9.7%. Guillermo Moreno is recorded with a vote of 1.7%.

In the survey, based on 1,400 interviews with randomly selected voters in their homes, was carried out on Monday, 22 June and Tuesday, 23 June. The poll has a margin of error of 2.6%.