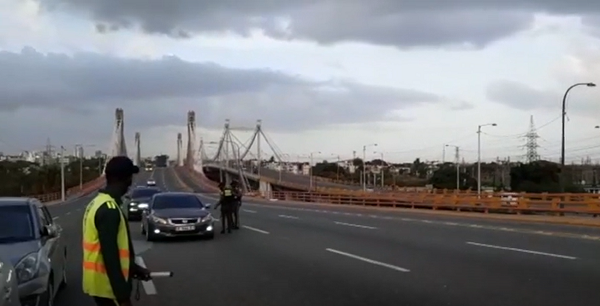 Thousands of persons were caught on the street at 5pm, the new curfew hour set for Saturdays and Sundays. Transportation and Traffic Safety Agency (Digesett) officers arrested hundreds.

Newspaper reporters were watching as hundreds of vehicles were hurrying to get home when they were stopped by members of the National Police or a Digesett agent. Agents on the Juan Bosch and Duarte bridges that cross the Ozama river were having a field day, and the traffic was really tied up. At the bridges, dozens of persons were detained.

Monday through Friday, the curfew is 7pm to 5am, but on Saturdays and Sundays it begins earlier at 5pm.

Social media sites reported that on Saturday there was major traffic tie-ups until after 6:00 p.m., especially on major avenues such as the Charles DeGaulle, the San Isidro highway and others.