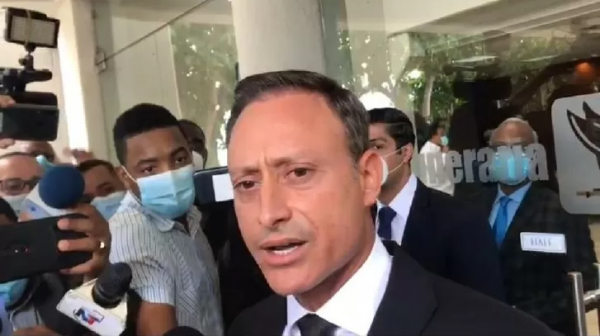 Former Attorney General Jean Alain Rodríguez denies he tried to leave the country this week. Reports are that he attempted to leave on a private flight. Online media and radio talk shows and social networks have been abuzz with reports on the attempted departure this week. Rodriguez, nevertheless, told the press he is available for ongoing investigations by the Justice Department.

Reports are that he attempted to leave the country on a private jet charter flight with his wife and two children. As reported, a migration agent notified his superiors and permission to leave was denied. The family left without him on the flight, say the sources.

Reports are that the final destination of the family was Paris, where the mother of Jean Alain Rodriguez lives. She is a former Dominican ambassador to Germany.

Rodriguez says he has no legal impediment to leave the country...
Click to expand...

This immigration officer made the correct call and deserves a promotion with a raise. France has a horrible track record for harboring wanted criminals and this POS head is on the chopping block along with his former boss.
Reactions: JD Jones and Africaida
W

His family left but according to him.... he had no intention of leaving

Isn’t this the guy who released the French pilots involved in that cocaine awhile back??
Reactions: irishpaddy

AlterEgo said:
Isn’t this the guy who released the French pilots involved in that cocaine awhile back??
Click to expand...

(sniff... sniff, sniff) that is an excellent question.
I read somewhere not long ago that he may be
investigated for sharing information he should
not have shared with "suspects" in multiple corruption
cases during his tenure in office.
Reactions: irishpaddy
P

AlterEgo said:
Isn’t this the guy who released the French pilots involved in that cocaine awhile back??
Click to expand...

Is anyone really expecting different results "this time."

playacaribe2 said:
I thought they were under house arrest.............and then they had that "great escape"..........only to be jailed, convicted and sentenced in France.

Is anyone really expecting different results "this time."

They were actually set free upon arrival in France while awaiting trial.
At said trial they were convicted and sentenced to 6 years in prison. However 6 months later they were set free again ---- minus their passports, they can't leave the country and they can't pilot anything that flies ----- as they have filed an " appeal" and the " cour d'appel" stated that they should appear in court free.

The only guy in prison ATM is the " mastermind" of all these suspicious rotations between the south of France and the Carribean.
So 1 out of a dozen suspected drug runners and/or dealers, corrupt officials, etc.....
He was sentenced to 18 years in prison.
Reactions: AlterEgo