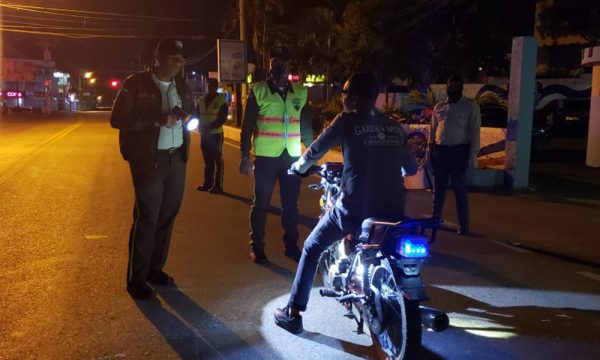 Now, Attorney General Miram German Brito says those found in violation of curfew will be sent to a justice of peace who will need to establish the fine. But the justice of peace will apply Public Health Law 42-01. The lowest fine in the Public Health Law is RD$10,000, for a tenfold increase!. Looks like more negotiating will be taking place with police and military as people avoid going to court over the fine.

I read law 42-01 Article 153. I agree with DN chief judge Vargas who says the fine cannot be imposed for violation of curfew. The health law and this article says fine can be imposed for violating orders of Ministry of Public Health (MSP) to prevent and control the spread of transmittable disease.

Curfew is not an order by MSP but by presidency. A judge cannot apply some law to an unrelated ordinance or decree. That's like applying Traffic law to curfew (I am sure some article of Traffic law could be alleged to vaguely apply). That's nonsense. MSP fine could apply, for example, if you are ordered to fulfill a quarantine and you break free and roam the streets, for example. But I see it legally very hard to apply law 42-01 to curfew violators. I agree with chief judge Vargas that a new law that establishes a penalty for curfew violators is needed in order to be able to impose any fine for that matter.

SANTO DOMINGO, Dominican Republic.- After the announcement of the fines that would be imposed on the violators of the curfew and later with the revocation of the same, the debate has been unleashed as to whether or not this type of sanction is legal for those who violate this measure imposed by the Executive Power.

According to statements by the coordinator of the National District Investigation Court, Judge José Alejandro Vargas, there is no legislation in the country that sanctions the violation of curfew hours.

He explained that currently what does exist is a health law that is not the same as a legislation on sanctions for curfew.

In that sense, it recommended that the Executive Power or the Attorney General's Office submit a bill to the National Congress to prosecute and prosecute violations of the curfew.

“There is no legislation to convict a person who fails to comply with the provision implemented to stop the contagion by the coronavirus in the country ... When people go out on the streets during restricted hours for circulation, they violate the curfew, they do not in the violation of the Health Law, so the sensible thing would be for legislators to commit themselves to approving a norm with rigorous sanctions, a crime of contravention, but that it achieves its purpose ”, he said.

According to the information on the subject, it is detailed that when the constitutional reform and the creation of Law 21-08 on the regulation of states of exception were approved on May 25, 2018, it was also agreed to later approve a law organic for the punishment of the violators of said states, however this was forgotten.

This is why, in conjunction with the statements of Judge Vargas, it is estimated that the justices of the peace that impose fines on violators of the curfew would not have a legal basis to apply such action.
Reactions: Caonabo
R

As I was not able to further edit:

Health law fine could apply to an order to wear mask in public areas, but you don't. In such case health law can impose fine on you. But not for curfew violation. Curfew had not been imposed by MSP, only had the curfew been imposed by MSP could the Health Law and its fines apply. Buy MSP has no constitution right to impose curfew. So Health Law cannot be used to impose fine for curfew violation. That's logical and legal argument. This single argument should get any fine dismissed at Justice of Peace hearing.
Reactions: Caonabo

I would expect to pay 10,000 pesos if I got caught violating curfew regardless of how the laws are written simply because of the way things move here.
R

CristoRey said:
I would expect to pay 10,000 pesos if I got caught violating curfew regardless of how the laws are written simply because of the way things move here.
Click to expand...