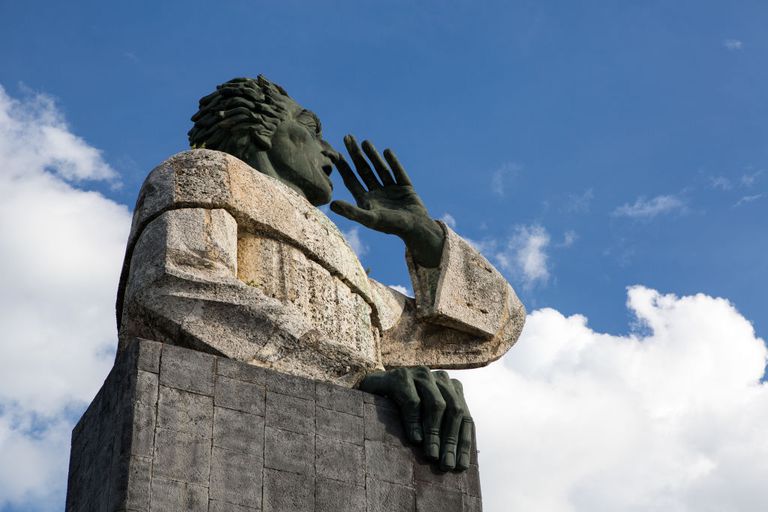 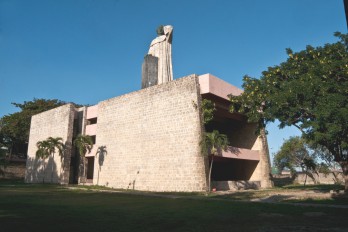 A little information about Montesinos and the monument itself.

Fray Antonio de Montesinos was a Spanish friar of the Dominican order of the Catholic church who lived in Santo Domingo during the first half of the 1500's. He was very critical of the treatment many Taino indians received at that time and the slavery based on African labor. He gave a very famous sermon clearly condemning the acts, which he considered unfair and inhumane. Part of his sermon is on display as a copy inside the monument. This is considered by many to be among the first calls of human rights in the America's, some 300 years before the French Revolution in France which is often credited as being the origin of human rights. There was other friars at that time that knew him personally and made their denouncements, the most famous of them all was also the Spaniard Bartolomé de Las Casas, who lived in Santo Domingo, in La Vega, and in Puerto Plata before residing in Mexico for most of his ecclesiastical life. However, Bartolomé de Las Casas tended to exaggerate his accounts and even wrote about things he never saw or was an eyewitness, which is a major criticism of his book. Antonio de Montesinos didn't exaggerate in his claims and only spoke of the things that he saw. Despite that, Bartolomé de Las Casas became much more famous due to publishing a book, which despite obvious exaggerations, was translated into various languages and scenes were drawn/painted. Though probably not his intention, his work became very popular in societies such as England and used as a pretext to denounce the Spanish in America and justify the English (and others) encroachments into Spanish lands in this hemisphere.

The monument itself was created in Mexico and was a gift from that government to the Dominican Republic in 1984. It's the largest statue of a Spaniard outside of Spain and is sort of the equivalence of Latin America's version of the Statue of Liberty in NYC. It's also one of the largest statues in the Dominican Republic (could be the largest in the DR and the Caribbean in general). The reason why he has his left hand close to his mouth in a shouting position is due to his official cry of freedom for the people held in bondage.

This was the most extensive renovation that has been done to the monument since its arrival in Santo Domingo in 1984. It's overlooking the Caribbean Sea south of the Colonial Zone and is visible from all yachts, boats, ships that dock at the port of Santo Domingo, whether is the terminal of Don Diego Colón or the newer Sans Souci across the river or the marina there because the statue dominates the view of the city for anything entering the mouth of the Ozama River.
Last edited: Apr 24, 2020
Reactions: NanSanPedro
You must log in or register to reply here.
Share:
Facebook Twitter Reddit Pinterest Tumblr WhatsApp Email Link
Top Bottom