Monsignor protests the impersonation of a priest 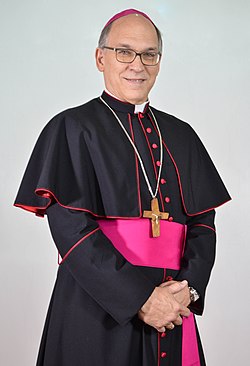 Monsignor Victor Masalles, bishop of the diocese of Bani, blasted that a National Police officer posed as a priest to end the abduction of a woman and her daughter in Cotuí. The kidnapper had asked to speak to a priest. The impersonation ended in tragedy, with the policeman shooting the man to put an end to the situation.

The Police said they a real priest was not called in because they feared his life would be at risk. “The man was not up to turning himself in,” he was pointing a gun at the mother and child and “we had to act,” argued the police.

Masalles tweeted, asking if in the future a person would ask to see a priest?

The dead man is José Antonio Reyes Uyola (El Gordo), who resided in the municipality of Maimón, province of Monseñor Nouel. According to the Police, Reyes was involved in shooting a 17-year-old boy before abducting the woman and her daughter.

The monsignor needs to find something else to get offended by.
Reactions: bob saunders and windeguy

NanSanPedro said:
The monsignor needs to find something else to get offended by.
Click to expand...

The ends justify the means once again. One less dirtbag on the streets that could harm children and women. Give the Colonel the medal of honor
Reactions: ChelseaRose, bob saunders, windeguy and 2 others
You must log in or register to reply here.
Share:
Facebook Twitter Reddit Pinterest Tumblr WhatsApp Email Link
Top Bottom