Good news from today’s DR1 Travel News, I remember when the monument was built.

Santo Domingo has a brand new touristic site. Plaza Fray Anton de Montesinos has been revamped for visitors and a formal inaugural is set for Tuesday, 25 June. The monument will then open to the general public on Friday, 28 June 2019.

The monument honors the Catholic missionary who was the first to sermonize Spanish colonizers when he spoke up in favor of the native Taino Indian inhabitants of the island in 1510. His famous speech against the enslavement and harsh treatment of the indigenous peoples of the island is regarded as the first human rights proclamation in the Americas. As part of the contemporary concrete structure, a 15 meters tall bronze statue of Fray Antón de Montesinos depicts the friar preaching in favor of the Indians.

For decades the plaza and environs had been taken over by truckers waiting in line to enter the Port of Santo Domingo. The statue in its center was donated to the Dominican people by the Mexican government of President José López Portillo (1976-1982) and was dedicated in 1982 by the presidents of Mexico and the Dominican Republic.

Upon taking office in 2016, new Mayor David Collado appealed to the Port Authority, Fenatrado truckers, executives of the SanSouci/Santo Domingo Port and the Specialized Corpse of Port Security for support for the city project. Some RD$36 million were invested in restoring the monument.

As part of the renovations, the plaza has been outfitted with meeting rooms with capacity for 150, 50 and 40, and 25 persons with air conditioning and panoramic views of the Caribbean Sea and the Colonial City.

i really believe David Collado is going to be a force to be reckoned with in the very near future.
2

I live half a block from the monument and the renovations, along with concrete sidewalk on the malecón and trimming of trees, have made a significant improvement on the visual impact of the area.
A

JDJones said:
i really believe David Collado is going to be a force to be reckoned with in the very near future.
Click to expand...

Article I wrote on him:
Fray Antón Montesino, some say his name was Montecinos and some call him Antonio Montesino, was born in Spain in around 1475. He was a Spanish Dominican friar who came to the island known as Hispaniola which is now divided into the Dominican Republic and Haiti in September 1510 as a missionary in one of the first group of missionaries to visit the island from Spain.

On December 21, 1511, Montesino gave an impassioned sermon criticizing the practices of the Spanish colonial system, and decrying the abuse of the native Taíno Indian people on the island.

The native Indians were treated very badly by the Spaniards and many worked to death in gold mines. Others committed suicide due to the appalling treatment, and most of the children died. In 1508 when a census of Indians was taken there were only 60,000 left of the original 400,000 that were counted when Columbus came onto the island only sixteen years before.

Having listed the injustices carried out by the Spanish to the Taino Indians, Montesino proclaimed that the Spanish on the island "are all in mortal sin and live and die in it, because of the cruelty and tyranny they practice among these innocent peoples.”

The sermon outraged the Spanish conquereors, including Admiral Diego Columbus who was the son of Christopher Columbus and there was an order from King Ferdinand II that Montesino and other Dominicans who supported him should be shipped back to Spain. However, after returning to Spain, Montesinos and his companions were able to persuade the king of the righteousness of their position.

As a result, the king convened a commission which promulgated the Laws of Burgos, which was the first code of ordinances to protect the indigenous people, regulate their treatment and conversion, and limit the demands of the Spanish colonizers upon them

In June 1526, he went to the United States and then returned briefly to Santo Domingo before going to Venezuela where he died around 1545. Fray Anton is known as the first person to call for freedom and equality for the people of America.

There is a large statue of Fray Anton Montesino delivering his sermon on the Malecon, just on the left of the D’Luis restaurant, so if you are eating there just go outside and look up and you’ll see it.

The stone and bronze statue faces the sea and is 15 meters tall and was designed by Mexican sculptor Antonio Castellanos. It was donated to the Dominican people by the Mexican government and dedicated in 1982 by the presidents of Mexico and the Dominican Republic.

Matilda said:
.....There is a large statue of Fray Anton Montesino delivering his sermon on the Malecon, just on the left of the D’Luis restaurant, so if you are eating there just go outside and look up and you’ll see it......
Click to expand...

Thanks Matilda, when I first saw the statue about 12 years ago I thought because the statue was near the water the person was yelling out to arriving ships. LOL Fray Anton de Montezino is the MLK of the native Americans but very few people heard from him.

known for his "Grito de Adviento" that the reason of the hand by his face.

Screaming for justice against the hard work enforced by the Spaniard to the natives.

2dlight said:
I live half a block from the monument and the renovations, along with concrete sidewalk on the malecón and trimming of trees, have made a significant improvement on the visual impact of the area.
Click to expand...

Did they just trim the trees? A friend who lives in Ciudad Nueva complained that they'd been cut down.
2

Chirimoya said:
Did they just trim the trees? A friend who lives in Ciudad Nueva complained that they'd been cut down.
Click to expand...

The trees were trimmed, some heavily. Some trees at the beach level were dug up and transplanted within the monument grounds. Quite a traffic jam last night prior to and during the private inauguration.
A

New in Santo Domingo: Plaza Fray Antón de Montesino
National District Mayor David Collado and Culture Minister Eduardo Selman reopened the plaza dedicated to Fray Antonio de Montesino (1480-1540), the first human rights defender of indigenous people in the Americas. The moving ceremony held on the sea-fronting Malecón plaza remembered Fray Antón de Montesino for his December 1511 sermon when he denounced abuses of the Spanish colonizers against the natives of the island. "The city hears again the cry of freedom of the Sermon of Montesinos that today is perceived in the voices of those who feared walking on the sidewalks around this monument," said Mayor Collado speaking at the inauguration.

Mayor Collado said RD$24 million were invested in roof waterproofing, new windows, air-conditioning, rebuilding of restrooms, paving the terrace, polishing marble floors and stairs, and implementation of access ramps for people with disabilities. Access roads were rebuilt, space was added for parking, security systems were installed. Landscaping and recovery of the adjacent beach area were also part of the renovations.

The monument opens to the general public as of Friday, 28 June 2019. The plaza will now have five rooms for cultural activities, and a large terrace that overlooks the Caribbean Sea.

Speaking at the inauguration, Mayor Collado said the monument is a symbol of the city of Santo Domingo. He thanked the Ministry of Culture and the Mexican Embassy. The 15-meter tall statue was donated in 1982 by the government of Mexico under then-President Jose Lopez Portillo.

Businessman and history patron Manuel García Arévalo, of the Dominican Academy of History, and Culture Minister Eduardo Selman spoke at the event highlighting the importance of the monument. The monument now will be under the governorship of a public-private management committee, head by Rosanna Rivera.

2dlight said:
I live half a block from the monument and the renovations, along with concrete sidewalk on the malecón and trimming of trees, have made a significant improvement on the visual impact of the area.
Click to expand...

If possible could you be kind enough to send us some pictures ....gracias
Last edited: Jun 26, 2019
N

There is a poll to get an idea if this monument is popular in DR1.

Juan Bosch said:
If possible could you be kind enough to send us some pictures ....gracias
Click to expand...

Yes.I will visit the site at different times during the next few days and attempt to show the improvement to the site itself and that of the surrounding areas.
R

I found some pictures in this forum, the place looks amazing, needs to scroll down because the pictures are in the bottom

The monument looks great but I'm so sad about all the trees that were cut down. "Pave paradise put up a parking lot". They also removed some of the giant drift wood logs from the beach that made it unique. Let's see what happens. 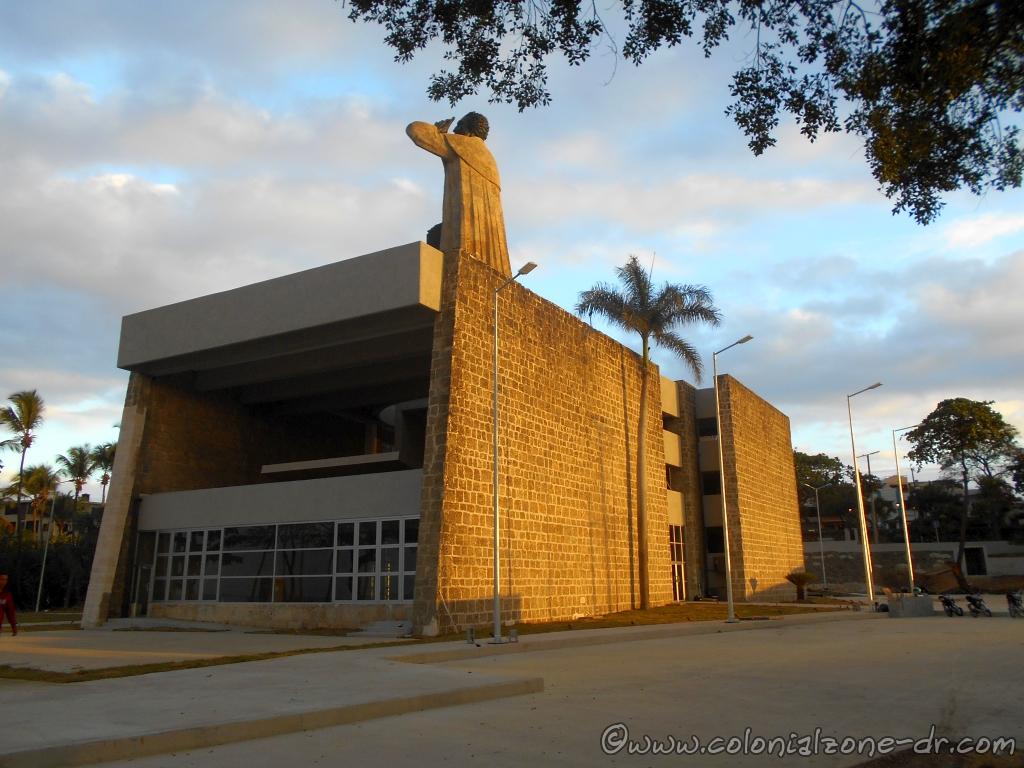 I found it interesting they build the building around the base of the monument which also seals off access to the misfit and junkies and pervs that used to hang out in the area.

I hope they maintain a security presence there. Otherwise the street will slowly claim it back.
J

The monument was restored once around 2012. It had all this interesting art called De Mi Barrio (here is a link to my dogs blog with pictures of the art https://colonialzone-dr.com/dominican-dog-blog/2012/03/20/taking-the-jump-from-montecinos/ - if not permitted please remove). There was always military guards. The place was cleaned up. All the human feces and junk were removed and it was a good place to visit. But, as usual, it was left alone again. I even called the Patrimonio to tell them about a tree that was separating the stonework. Nothing was done (you can see in the picture I posted on the left pillar the cement work they finally did from the tree damage) Used as a dump for all the garbage from the Renovation of the Colonial Zone. They closed off the entrances and piled trash all over. It was a disgrace. So again it is restored. I hope they keep it up, but they are not known to do upkeep. They restore monuments, spending millions, then leave it alone to deteriorate.
A

SANTO DOMINGO.- The monument to Fray Antonio de Montesinos received in its first weekend open to the public more than 6 thousand people, after Mayor David Collado inaugurated his renovation.

Families, young people and tourists came to the emblematic monument to explore the 4 levels that make it up, knowing what it will offer in its facilities and listening to its guides the story that raised Montesinos to be the first proponent of Human Rights.

During Friday 28, Saturday 29 and Sunday 30, from 9 am to 7 pm, the monument opened its doors for free with a series of activities for the enjoyment of visitors such as live music, tours , art exhibitions by Angurria, Kulia and Fernando Varela, as well as screenings and Microteatro.

During the tours, visitors expressed their satisfaction with the change in the Malecón de Santo Domingo and now with the recovery of Montesino, which not only gives a fresh and safe air to the city, but also allows connecting the new generations with the history of our country.

From now on, the Museum of Fray Antonio de Montesino will be open to the public every day, except on Tuesdays, from 9 a.m. to 6 p.m., and on weekends from 9 a.m. to 8 a.m. the night. The same will cost 50 pesos for children and adults.

The monument will be under the government of Rosanna Rivera and its Museum Coordinator will be Manuel García Arévalo, and will also have a bipartite management committee between the City Council of the National District and the Ministry of Culture.