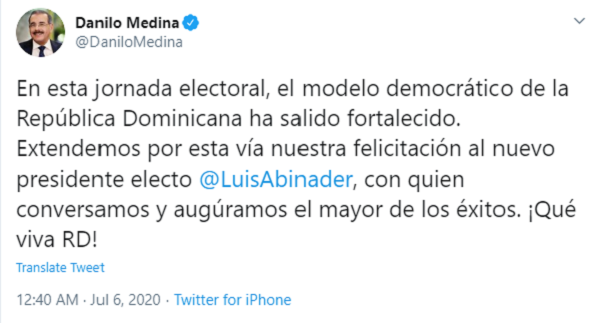 “On this election day, democracy in the Dominican Republic has been strengthened. We extend our congratulations to the new President-elect Luis Abinader, with whom we have talked and wish him every success,” said the President on his Twitter account.

Medina said that on this election day the country has come out stronger.

Gonzalo Castillo, the official candidate for the Presidency, also recognized the “irreversible win” of the opponent Luis Abinader.

Castillo, of the Dominican Liberation Party (PLD), said that the triumph of Abinader, of the Modern Revolutionary Party (PRM) was “deserved”.

“The count shows that there is an irreversible trend and that from now on we have an elected president and he will be the president of all Dominicans from Aug. 16,” the pro-government candidate said in statements to journalists at the doors of his campaign headquarters.