Yeah English can be confusing.

I feel sorry for Spanish speakers trying to learn how to pronounce and write English.
Reactions: chico bill

Here's a little poem for you called "The Chaos" by a Dutch poet named Gerard Nolst Trenité:

I will teach you in my verse

I will keep you, Suzy, busy.

So shall I! Oh, hear my prayer.

Dies and diet, lord and word.

Sword and sward, retain and Britain.

(Mind the latter, how it's written).

Made has not the sound of bade,

Now I surely will not plague you

With such words as vague and ague.

But be careful how you speak,

Cloven, oven, how and low,

Hear me say, devoid of trickeryaughter, laughter and Terpsichore,

Knowledge, done, but gone and tone,

Banquet is not nearly parquet,

Which is said to rime with "darky."

Toward, to forward, to reward.

When you say correctly: croquet.

Friend and fiend, alive, and live,

We say hallowed, but allowed,

Chalice, but police, and lice.

Rime with "shirk it" and "beyond it."

But it is not hard to tell,

Why it's pall, mall, but Pall Mall.

And enamour rime with hammer.

Doll and roll and some and home.

Stranger does not rime with anger.

Neither does devour with clangour.

Soul, but foul and gaunt but aunt.

And then: singer, ginger, linger,

Query does not rhyme with very,

Though the difference seems little,

We say actual, but victual.

Reefer does not rhyme with deafer,

Feoffer does, and zephyr, heifer.

Tour, but our and succour, four, Gas, alas, and Arkansas.

Say aver, but ever, fever.

Never guess--it is not safe:

We say calves, valves, half, but Ralph.

Crevice and device, and eyrie,

Face but preface, but efface,

Large, but target, gin, give, verging,

Ought, out, joust, and scour, but scourging,

Ear but earn, and wear and bear

Do not rhyme with here, but ere.

Seven is right, but so is even,

Won't it make you lose your wits,

It's a dark abyss or tunnel,

Islington and Isle of Wight,

Don't you think so, reader, rather,

Finally: which rhymes with "enough"

Though, through, plough, cough, hough, or tough?

Hiccough has the sound of "cup."

I couldn't bare to tell her about the bear behind her as she stood there bare in front of me as if to bare her soul.
Reactions: D'Arcy (Apostropheman), aarhus and cavok

Aaand, my all time favorite: 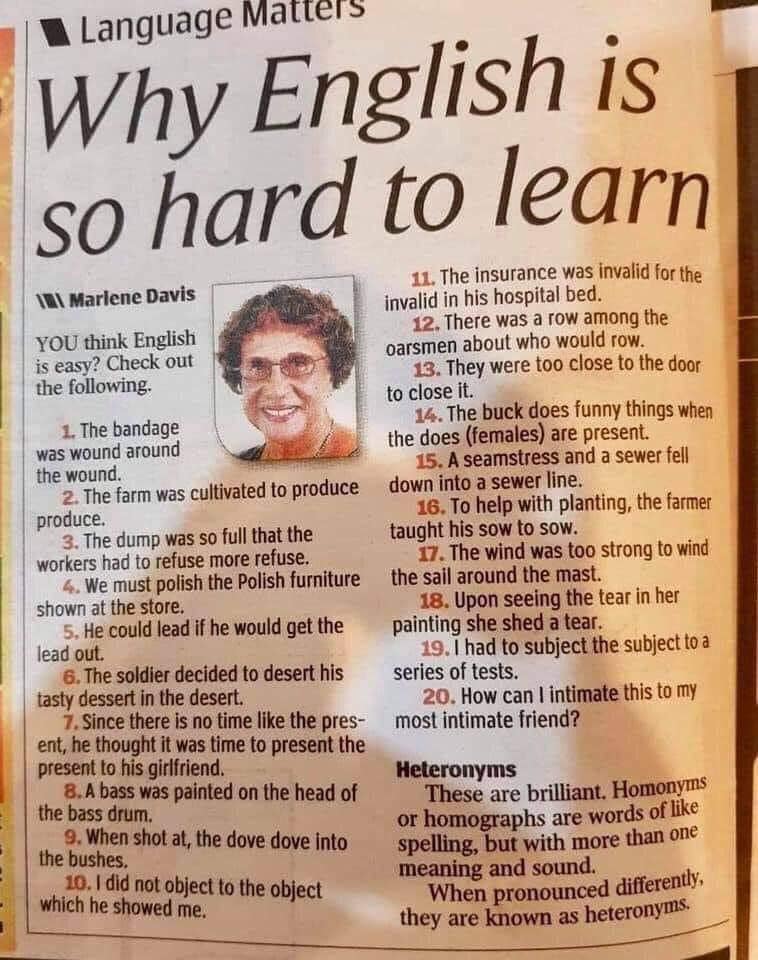