Where is this waterfall?

Hi there, I'm ready for another trip to DR and looking for new places to explore
I saw this video but I've never heard of this cascade. Does anyone know the location?

When you watch the YouTube link, it says the falls are in Samana, DR. Where is it located in Samana, not sure?
G

Yes, I saw it, but I have been to Samana before and never heard of it.
C

Our friends at Google Maps place it adjacent to the town of El Valle. Search on: Salto El Zumbador. Is that it?
Reactions: AlaPlaya and BermudaRum

Chuleta de Puerco said:
Our friends at Google Maps place it adjacent to the town of El Valle. Search on: Salto El Zumbador. Is that it?
Click to expand... 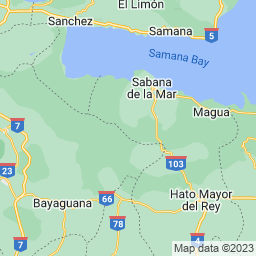 BermudaRum said:
When you watch the YouTube link, it says the falls are in Samana, DR. Where is it located in Samana, not sure?
Click to expand...

It could had been a marketing ploy on the part of the tour operator that took them there. It has been done before. For a time when there were several resorts in Juan Dolio many tourists actually thought the were in Santo Domingo capital because it was sold to them as such. Many tourists in Bávaro arrive thinking they are in Punta Cana. At first Playa Nueva Romana was marketed as being in La Romana province when in reality it's in San Pedro de Macorís province.

Even none touristic places go through this. The headquarters of Acero Estrella has a billboard that "welcomes" people to Santiago and on their magazines, books, correspondence, etc they have a tendency to put Santiago, despite it truly is in La Vega province. To make it even more weird is that the government put a sign immediately south of the bridge of the entry avenue of the airport that makes it clearly from that point forward it isn't Santiago province. I get it why the owner and founder insist on this Santiago thing, because he is a Santiaguero and the pride of some Santiagueros of families that has been part of the city for centuries has to be seen to be believe. He followed an advice when he started the company since initially he wanted to locate it on a rural road. He was told that successful companies are not placed in "callejones," his company should be on the Duarte and he should buy where the price of land was comfortable to him. Hence, he ended up buying right over the border from Santiago, but Acero Estrella has never been in Santiago. That is one of the top Domimican engineering company and definitely the most international one with many projects his company has done in Haiti, Panama and other countries.
Last edited: Feb 9, 2022
Reactions: JD Jones
You must log in or register to reply here.
Share:
Facebook Twitter Reddit Pinterest Tumblr WhatsApp Email Share Link
Top Bottom