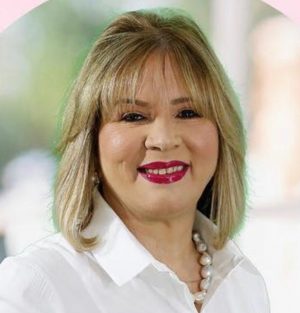 President-elect Luis Abinader tweeted on Monday that he chose Yadhira Henríquez to be his new director of the Social Plan of the Presidency starting 16 August.

She has been a councilwoman and deputy to the National Congress for the National District (1994-2000). She was the Dominican Republic’s first Women’s Minister in 2000 under the President Hipólito Mejía government.

She has a doctorate in law from the Universidad Autónoma de Santo Domingo (UASD), where she also obtained a postgraduate degree in Diplomacy and International Relations and another in Criminal Procedural Law.

She is the wife of a former president of the Dominican Revolutionary Party (PRD), Vicente Sánchez Baret. Sánchez Baret is a former senator for Sanchez Ramírez. The PRM was formed when the party split between the followers of Hipolito Mejía and Luis Abinader and those following...
Click to expand...