bluemoonnyc said:
I realize that,,,if you pour the baking powder down the drain then pour the vinegar on top the foaming action causes pressure in the drain pipe pushes the clog thru without burning the drain,especially if you have a PVC drain.
How's thaT FOR A RUN ON SENTENCE?LOL
Click to expand...

Not bad! Thanks for the reply. It makes sense now. There would certainly be some pressure behind it.

Ya know, a person could simply bring in a hose, wrap it up using a washcloth to provide a seal to the drain and turn on the hose to blow out the blockage.

Derfish said:
I've seen pipes below the sink blowed out in that manner.
Der Fish
Click to expand...

I'll bring you something next week if you can't find anything before that.....

Derfish said:
I've seen pipes below the sink blowed out in that manner.
Der Fish
Click to expand...

Must have been really clogged. Or did the guy just open the faucet like say tim the tool man taylor would have and everything blows apart.

Derfish said:
No, they stuck a forced hose down the bathroom sink.
Der Fish
Click to expand...

They sell a device that attaches to a hose, blows itself up sealing in the drain, and clears drains with controlled water force. These have been around for years.
J

This is a perfect solution..... I know this works


dv8 said:
in this case empty a box of baking soda into the drain and then pour a cup of white vinegar over it. the visual effect is quite pleasing and it will unclog the drain a little bit without any damage.
Click to expand...

It's got nothing to do with the disposal motor getting hot , cold water makes the grease coagulate so that it rolls out easier and doesn't build up in your pipes , I have forgotten more about plmg. then your four Dominican plumbers will ever know. P.S , that's one of the questions on the plumbers exam in Massachusetts.
W

never use HOT, HOT water down the drain.
after a period the pipe glue deteriorates and the pipe falls off below.

Happened to me twice in a month in two different houses.... replaced with metal fittings in the US.

when dumping boiling water, turn on the cold at the same time

Also, I never use hot, hot water for the disposal.... motor doesn;t like it.... tepid to hot for me
Y

1 cup baking soda, 1/2 cup vinegar. pour in sink, cover with plug for 30minutes then pour hot water down drain for about 2 to 3 minutes.:bunny:
P

jstarebel said:
They sell a device that attaches to a hose, blows itself up sealing in the drain, and clears drains with controlled water force. These have been around for years.
Click to expand...

Yep, they're called Wonder Weenies by everyone I've met who does plumbing... They work great, esp for blockages below the toilet. Makes the craziest noise while they're inflating.. They are good for blockages in 3-4" lines but I wouldn't use a small one for the S traps. 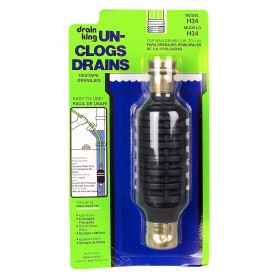