cavok said:
In that person's case I'd say it's time to get residency. All legal residents can get a drivers license. Tourists who overstay are not here here legally.
Click to expand...

Well they say they are working, so they should be a legal resident, a resident has a cedula.
Reactions: windeguy
C

One complaint I'm hearing(not sure if it's true), is that the helmet will have a QRC code on the back that anyone could scan it and get your name and address(?).

cavok said:
One complaint I'm hearing(not sure if it's true), is that the helmet will have a QRC code on the back that anyone could scan it and get your name and address(?).
Click to expand...

I thought the helmet needs to have the plate numder.
Reactions: AlaPlaya
C

Northern Coast Diver said:
I thought the helmet needs to have the plate numder.
Click to expand...

Hope not! Like you said, that would be too much info!
W

El Hijo de Manolo said:
Why would you need a license for a recreational vehicle on private property? Golf carts are illegal to drive on public roads. That's not saying folks don't do it. So now you need a license to drive a cart for 18 holes? Silliness
Click to expand...

william webster said:
No no Magoo

No UncleW, I was referring to the golf cart. How could a license be required for a golf cart when they are not even authorized public road vehicles.
W

One of those things that made me say, "Hmmmm?"
W

El Hijo de Manolo said:
No UncleW, I was referring to the golf cart. How could a license be required for a golf cart when they are not even authorized public road vehicles.
Click to expand...

They are being used on public roads in Sosua. They have only been told to stay off route 5, the main highway.
W

beeza said:
Well I have a Dominican Driver's licence to drive a car. One would assume that I would be suitably licensed to drive my quad, which is legally here (ie registered in my name, valid placa and insurance)

But maybe I'll need a separate motorcycle licence for my quad. I dunno?

I'm also not sure about helmet requirements for a quad. I always use one regardless if it's mandatory or not. It's the old biker in me, I feel naked riding a bike (two or four wheels) without one. But it would be nice to know the exact legal requirement. The local cops/AMET/DIGEST don't know. Ask three different cops, get three different answers!
Click to expand...

The regulations quoted in this thread indicate a motorcycle license is needed for a quad. That is how I read it.

The point is they are not treated under C1. They are not a vehicle that requires a license. Even if Willy bends the laws for Sosua and permits golf carts, they are not public road vehicles. I have personal dislike for the following transit distractions: dune buggies, golf carts and horses.

The bottom line, however you will not need a license for a golf cart.
W

Cuatrimotos are ATVs or quads

Every other vehicle that does not fall under a car license 02 or higher needs an 01 license as stated in:

I would say the jury is out on golf carts, but likely to need a class 01 license since that falls on all vehicles not covered by class 02 or higher and a golf cat is indeed a type of vehicle and I quote:
Cualquier otro Vehículo de Movilidad Personal (VMP) que cumpla simultáneamente las condiciones establecidas en el presente artículo.
W 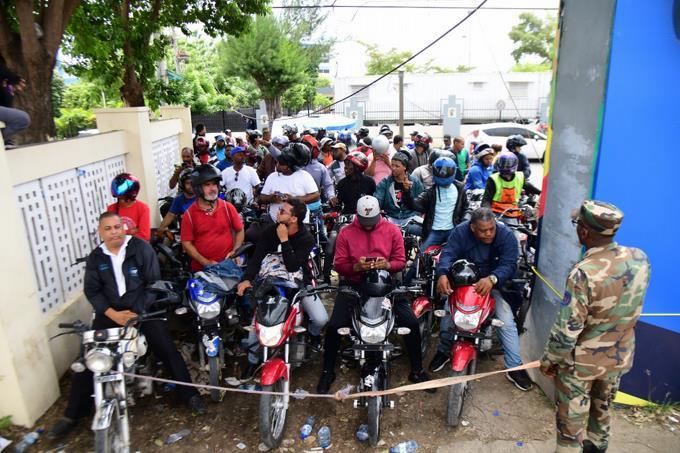 <p>Santo Domingo, DR. Angel Leonel Canó, a representative of a group of lawyers in the country, informed that he, together with the group of jurists, deposited an Action of Protection of Extreme Urgency before the Superior Administrative Court (TSA) against the implementation of the plan imposed...

Agreed with the point about DGII being the place where vehicles are registered by law.
My wife had to have that registration from DGII to "register" again at INTRANT, which is certainly redundant.

But she did not have to get any stickers for her helmet as I mentioned.
C

How that applies to quads/dune buggies/etc needs to be substantiated .

Used in Jarabacoa, at least on the streets inside town.
W

Magoo is thinking they need licensing while on the golf course......
a bit odd but...... everybody's entitled to their opinion !!

william webster said:
Magoo is thinking they need licensing while on the golf course......
a bit odd but...... everybody's entitled to their opinion !!
Click to expand...

where did I say that. You said that that golf carts will probably fall under c1. You do not need a license for a golf cart.
W

There are issues for people who don't have confirmed legal residency in DR getting registered and licensed to drive motos and Immigration is involved verifying the legal status of Haitians and Venezuelans who have a legal right here (presumably with work permits or the regularization and consequently no cedula).

If you are not living legally here it appears you will not be able to get registered and ride a moto is the message. Bad news for all overstayers.

The second issue appearing is that people with driving licenses for cars and trucks are questioning if they need moto licenses. The Decree 6-19 Art. 15 in respect of licensing is clear. If your moto is above 125cc you need a 1b license and with a car license category 2, you are only able to drive a moto up to 125cc. so if your moto or pasola is more than 125cc you have to get a new license. Apply to tricycles and quads too.

Legalized foreigners with an approved license in the country face problems when registering motorcycles at the National Institute of Transit and Land Transport (Intrant), since it is still in the process of transferring data with the General Directorate of Migration (DGM).

After completing their queue and reaching the payment and registration booths, they realize that, despite having all their documentation up to date, they are not registered on the platform, so they are sent to the Department of Licenses at the Ministry of Works. Public and Communications (MOPC).

“I am Venezuelan and I have all my papers up to date and I do not appear registered on the page, now I have to do other totally unnecessary steps to be able to register, and I have my clear license since 2017 when I began to reside in the Dominican; this is a total abuse”, claimed Ricardo Arrieta with reluctance.
When inquiring the Intrant authorities about this problem, their response was "we have been working with the Immigration Directorate, the base of the foreigners is they who handle it, we already have the protocol that is in transfer, we only need to give the final touches, at any moment we will be publishing that we will start working with foreigners”, detailed Melido Agramonte, in charge of the Motorcycle Registration Plan.

On the other hand, some motorcyclists who have not yet taken the step of registering their engines have complained that their vehicles are being stopped and withdrawn for not having this paperwork updated, even when they have all their documentation up to date.

Reporters from Listín Diario, on different occasions, have tried to approach the body of the General Directorate of Traffic Safety and Land Transportation (Digesett) to find out if its regulations allow the act of seizure; however, there have been no responses from the institution.

Along the same lines, another situation that has caused a stir among drivers is the need to have licenses in another category, in order to complement the process of registering their engines and whether they must obtain a category 1 license, which is the one corresponding to motorcycles.

“Having a truck license, which is number three, I had to get one. I understand that if you can drive a truck, it goes without saying that you can drive a motor,” added Gilberto Pérez.